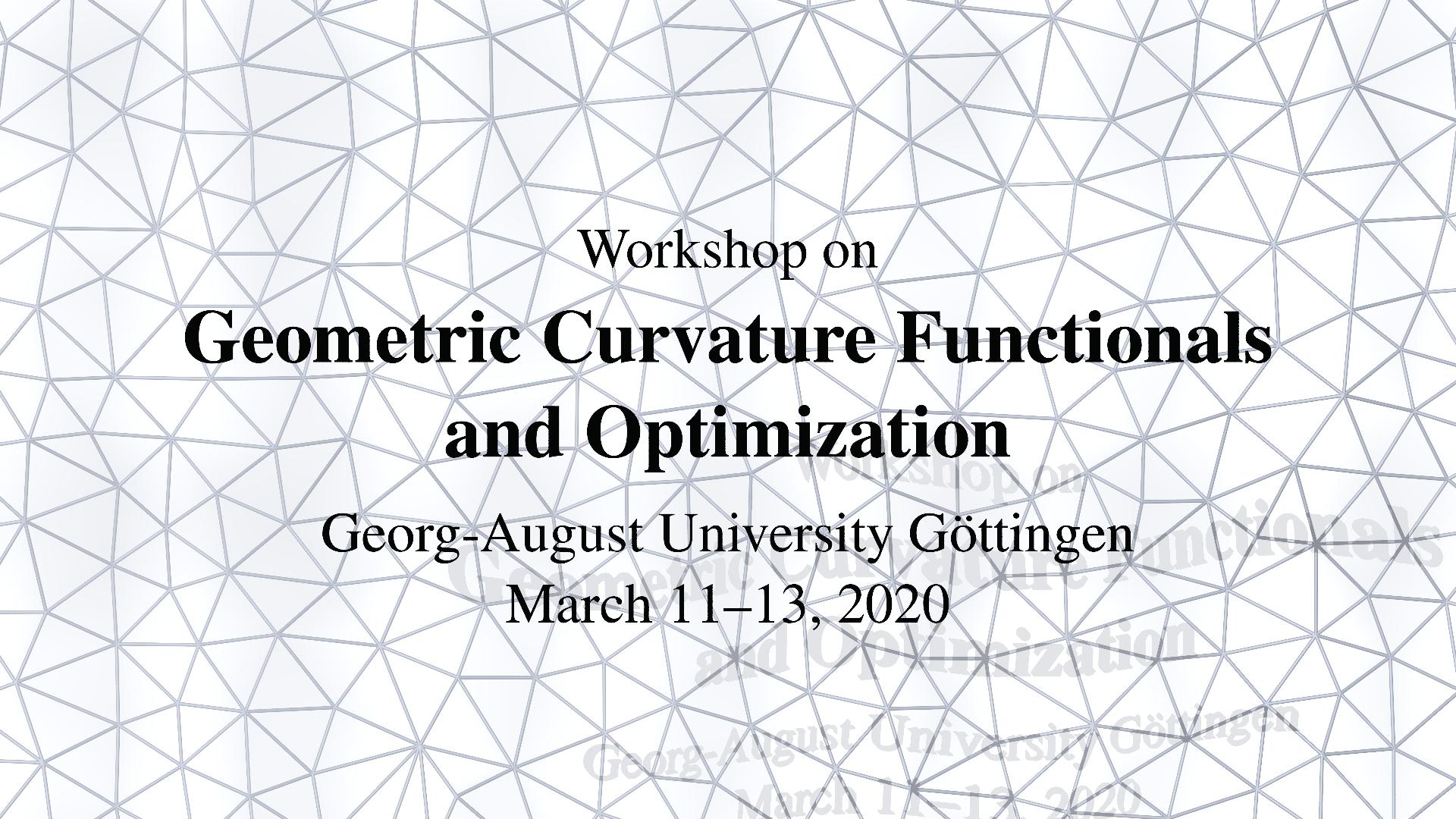 Geometric curvature functionals, their minimizers, and their respective gradient flows give rise to beautiful and intricate mathematical theories. Minimal surfaces, Euler elasticae, minimizers of the Willmore energy, and minimizers of knot energies are prime examples.

In recent years, there has been a rising interest into the computational treatment of such geometric functionals – combining methods and insights from structure-preserving numerical analysis, optimization, (discrete) differential geometry, statistics, and computer science.

The aim of this workshop is to bring together researchers from a variety of different fields working on and using geometric functionals – and to further stipulate scientific exchange between these groups – with topics ranging from analysis over geometry to optimization on manifolds and computer graphics.

The workshop takes place at the Institute for Numerical and Applied Mathematics,Lotzestr.16–18.
The social room and the seminar room are located in the first and second floor, respectively.

Gradient flows for Curvature energies - from classical to fractional equations


The study of elastic energies of a curve or a plate, ever since Sophie Germain’s fundamental work on elasticity and Ernst Chladni’s investigations of sound figures, has inspired groundbreaking mathematical research at the interface between mathematics and physics. In the last three decades fractional version of these energies have appeared in the field of geometric knot theory to model self-repulsive effects.

This talk will try to span the bow from the early beginnings of the subject to these new repulsive potentials. We will focus on known results and open problems in the context of their negative gradient flows.

We propose a natural framework for the study of surfaces and their different discretizations based on varifolds. Varifolds have been introduced by Almgren to carry out the study of minimal surfaces. Though mainly used in the context of rectifiable sets, they turn out to be well suited to the study of discrete type objects as well.

While the structure of varifold is flexible enough to adapt to both regular and discrete objects, it allows to define variational notions of mean curvature and second fundamental form based on the divergence theorem. Thanks to a regularization of these weak formulations, we propose a notion of discrete curvature (actually a family of discrete curvatures associated with a regularization scale) relying only on the varifold structure. We prove nice convergence properties involving a natural growth assumption: the scale of regularization must be large with respect to the accuracy of the discretization. We performed numerical computations of mean curvature and Gaussian curvature on point clouds in $\mathbb{R}^3$ to illustrate this approach.

A Gaussian model for topological polymers


The mechanical properties of elastic materials like rubber and collagen depend on the geometry and topology of the network of polymer strands which make up the material. The topology is that of an extremely complicated random graph, and the geometry is that of a random embedding of that graph into $\mathbb{R^3}$.

In this talk, we discuss the theory of gaussian random embeddings of graphs, connect it to the James-Guth-Flory theory of "phantom elastic networks", give a simplified and clarified picture of the existing theory using homology theory, and derive new results on the expected geometry of a random embedding of a fixed graph. It turns out that spectral graph theory explains a great deal about the behavior of these polymers.

Although our model doesn't include phenomena such as self-contact or specify a physically realistic potential energy for the polymers, we see that it is in reasonable agreement with detailed molecular dynamics simulations performed on the TSUBAME supercomputer at Tokyo Tech and with experimental data from the Tezuka lab. This talk is joint work with Tetsuo Deguchi, Clayton Shonkwiler, and Erica Uehara, and will cover material from 2001.11709 as well as newer work.


A basic challenge in field-guided hexahedral meshing is to find a spatially-varying frame that is adapted to the domain geometry and is continuous up to symmetries of the cube. We introduce a fundamentally new representation of such 3D cross fields based on Cartan's method of moving frames. Our key observation is that cross fields and ordinary frame fields are locally characterized by identical conditions on their Darboux derivative. Hence, by using derivatives as the principal representation (and only later recovering the field itself), one avoids the need to explicitly account for symmetry during optimization. At the discrete level, derivatives are encoded by skew-symmetric matrices associated with the edges of a tetrahedral mesh; these matrices encode arbitrarily large rotations along each edge, and can robustly capture singular behavior even on coarse meshes. We apply this representation to compute 3D cross fields that are as smooth as possible everywhere but on a prescribed network of singular curves—since these fields are adapted to curve tangents, they can be directly used as input for field-guided mesh generation algorithms. Optimization amounts to an easy nonlinear least squares problem that behaves like a convex program in the sense that it always appears to produce the same result, independent of initialization. We study the numerical behavior of this procedure, and perform some preliminary experiments with mesh generation.

On the elastic flow of networks


In the Bernoulli model of an elastic rod described by a curve the elastic energy is given by the integral over the curve of the curvature squared. Due to the behavior of the energy under scaling, one soon notices that the length of the curve should be penalized (or fixed) to find minimizers. For this penalized energy in order to find critical points we consider the steepest descent flow. That is, a one-parameter family of curves that changes in time in such a way that the energy decreases as fast as possible, i.e., in the direction of the $L^2$-gradient of the energy. This gives a fourth order geometric flow and, for closed curves, it is well known that, starting from a smooth initial datum, the solution exists for all time and sub-converges to a critical point.

We extend this result to networks of 3-curves. We consider networks of 3-curves in $\mathbb{R}^{n}$, where each of the three curves is fixed at one end-point and at the other is joint to the other curves at a movable 3-junction, a three pointed star network. For this geometric evolution problem with natural boundary condition we provide a long-time existence result and a sub-convergence result under some mild topological assumptions.


The total variation (TV) is an important functional which has numerous applications in imaging and inverse problems. In this talk, we consider the total variation of the normal in the context of discrete shape optimization problems, which include mesh denoising, mesh inpainting, and geometric inverse problems involving partial differential equations. Numerical results are included to illustrate the concepts. Finally, we extend the notion of total variation of the normal to the second-order total generalized variation.

A bending‐twist model for elastic rods


In pursuit of modeling springy wires we study framed curves, assuming that their evolution is driven by a linear combination of bending energy and twisting energy. The latter tracks the rotation of the frame about the centerline of the curve.

In order to incorporate impermeability which precludes topology changes throughout the evolution, we add a self‐avoiding term, namely the tangent‐point potential. We discuss the discretization of this model and present some numerical simulations.

Navigating the space of Chebyshev nets


Many materials are built from a grid of flexible but nearly inextensible rods that behaves as a shell-like structure. Everyday examples range from fabrics made of 1000s of interwoven yarns; to kitchen strainers made of 100s of plastically deforming wires; to architectural gridshells or medical stents made of 10s of elastically deforming rods. In this talk, I emphasize the geometric constraints common to these different physical systems. We build from a differential geometric model for woven fabric, initially introduced by Pafnuty Chebyshev in 1878, that directly encodes the inextensibility of the two families of rods.

We discuss the theory of Chebyshev nets through a series of applied, collaborative efforts in computational fabrication and inverse design. Theoretical obstructions expose the challenges in finding Chebyshev nets on surfaces with large amounts of curvature, suggesting a limited shape space. However, we show that a careful reformulation of the problem, combined with a discrete analog of Chebyshev nets, leads to computational tools that reveal a vibrant design space.


Optimization on manifolds and equality constrained optimization may be seen as complementary modelling paradigms for a given problem. On the one hand, equality constraints are a quite general way of describing a feasible manifold and give rise to rather general SQP-type algorithms. On the other hand, if the feasible manifold admits mathematical structure, optimization algorithms on manifolds can be employed to exploit this structure. This can be particularly useful for highly nonlinear large-scale problems.

In this talk we consider the combination of both techniques. After discussing the general setting and basic theoretical results, we describe an SQP-approach to equality constrained optimization on manifolds. In particular, we extend a composite step method to the setting of nonlinear manifolds and describe its main features. We illustrate our technique with a simple variational problem posed on a manifold, namely an inextensible elastic rod. We consider the computation of energy minimizers, but in addition, we formulate an optimal control problem for this rod, which leads to an optimization problem on vector bundles. We discuss the application of our algorithm to both problems and show numerical results.

This is joint work with Julian Ortiz-Lopez (Uni Bayreuth)


Generalized Integral Menger Curvature, introduced by S. Blatt and Ph. Reiter, is a knot energy, i.e., a functional on the set of closed, embedded curves that punishes self-intersections. For certain parameters, the fractional Sobolev space associated with the energy is a Hilbert space, enabling us to define a gradient flow which evolves the original curve into a "nicer" shape.

With the method of projected gradients, which preserves a constraint along the flow, we obtain a lower bound on the existence time of a modified gradient flow. This lower bound depends only on certain properties of the initial curve which are ensured via the constraint, enabling us to continue the flow indefinitely.


The workshop takes place at the Institute for Numerical and Applied Mathematics, Lotzestr. 16–18.
The social room and the seminar room are located in the first and second floor, respectively.


Rooms are booked for all speakers in Eden Hotel Göttingen, Reinhäuser Landstraße 22a.
It is only a ten minutes walk from the hotel to the institute.


Here a small (and admittedly very subjective) selection of restaurants in walking distance; most of them serve also at lunchtime:


We gratefully acknowledge support by: